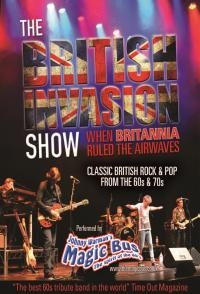 From the team behind the sell-out Mods and Rockers show, Johnny Warman brings you The British Invasion Show, reliving an iconic time between 1964 and 1966 when British bands captured American charts and minds. This encapsulating musical journey includes the music of The Rolling Stones, The Beatles, Cream, Them, The Yardbirds, The Small Faces, Pink Floyd and The Kinks. So prepare for Great British classics and another evening great music.